Life is Better on Two Wheels

This is a video I made when I was still living in Bali. My friend Hieu who is a seriously fast rider came for a visit, so I decided to take him on a long ride to look for the Eastern coastal roads.

We started off in Kerobokan area where I lived in South Bali, and headed North East. We never found it but we found the start of it and a couple of gems. In particular Kebun Impian resto and hotel, in Seraya Barat (West Seraya). Located just before Amed on the Eastern tip of Bali.

When my brother and Pasha visited, Priscilla and I took them on the actual Eastern coastal roads.

Here is the contraption I used to shoot the video. An Ultrapod strapped to the left handlebar, by its own velcro straps. Canon Ixus 100. It made gripping the bar a little difficult so I wouldn't recommend it if you aren't a good rider or going into dangerous areas.

Update: the things we had to do before GoPro was invented

Jiu-Jitsu Defense According to a White Belt

At this point, I’ve been training on and off for 2.5 years. For what it’s worth this is what I do for bjj defence. I’ve been focussed on this stuff and it’s been working pretty well for me. Everything I describe below has worked for me for gi, nogi, and mma.

1.       Keep your hands up close to your chest with your elbows tucked in. It doesn’t matter if you are on your feet or on your back. Protect your head and face from strikes. If someone knocks you out they can have their way with you and none of the advice below will do you any good.

2.       Grip fight like a mofo. You have to intercept their hands and not let them establish their grips. If someone grabs your lapel, strip it right away. If someone grabs your wrist or sleeve, hand fight. If you let someone control one of your arms and latch onto your torso, you’ve already begun to lose the exchange. I learned this from taking 2 or 3 judo classes.

3.       Don’t settle for bottom. If someone is halfway to taking you down, use your energy to defend the takedown and stay on top. Use whatever takedown defence you know. If you end up on the bottom it’s going to take even more energy to defend and get back on top. I got this from Niko Han. It really changed my grappling mentality and performance.

4.       Never ever lie flat on your back. As soon as someone takes you down or passes your guard, get on your side and face them. On your side as in 90 degrees to the ground. Block the incoming cross-face using your closest hand while keeping your elbow tight to your body. Fight to block it. It’ll make your life much easier. I’ve read many articles to find the best posture for this, still experimenting.

5.       If you are wearing a gi, your opponent mounts you and grabs a cross collar grip for a choke, turn your body towards the elbow of the attacking arm. I got this from Saulo Ribeiro’s book and it works amazingly well! When you turn your body towards that arm it takes away the angle of the choke. You have to do this as soon as you see them go for the grip. If you are late they will get their second hand in and you are done.

6.       Whenever you feel a hand or forearm touch your neck, abort everything you’re doing and grab their attacking hand with a two-on-one grip. You have to respect the choke. It doesn’t matter what position you are in or if you are in the middle of your own set-up, abort everything and defend your neck. Even if you end up in an inferior position, you are still conscious and in the fight. Anytime I grab a two-on-one grip, I can use it to set up an escape. Another gift from Niko Han.

[Update] My instructor Ritchie Yip showed me that if I grab the two-on-one in any position, i.e. bottom cross side, bottom mount, I can disrupt the offence of my opponent. They will eventually get frustrated and give me space in order to grip break. I mostly grab the two-on-one when I'm in four-point or someone has my back. Now I'll experiment with it from everywhere. Great tip.

7.       Keep your elbows and forearms tight to your body. If your elbows are flared out your opponent will arm drag you for takedowns, use it for upper body control, or arm lock you. Some people call it T-Rex arms or prayer position. For the last few months, I’ve been doing the prayer position but clasping my hands together with a gable grip. This gabled prayer forearm posture has been money for me.
If someone manages to grab one of my elbows or forearms, I can use the strength of both my arms to reel it back in. If someone manages to set up an armbar, the gable grip gives me an extra moment to react with the appropriate escape. I also pre-emptively hide my elbows by pinning the closest one to them, down to the ground. From this forearm posture, I can keep my hands clasped together while I dig for elbow knee escapes, bridge and push off my opponent, roll to four-point, escape from knee-on-belly, etc.

Basically I’ve been moving my body like I don’t have any arms, it’s been working well for me and hasn’t hindered my game at all. I automatically return to this forearm posture even when someone attempts an armbar or triangle from their closed guard.

8.       When some takes my back, I assume my forearm posture and defend any incoming chokes, then I get into what Saulo Ribeiro calls the Scoop. I slide my body down towards my feet and spread my legs out for base. If I’m too far down my opponent cannot choke me and my arm posture prevents any armbar attempts. From there I can work on my escape.

Here’s a video of the Scoop:

9.       If I end up in four point, I don’t wait around for them to attack, I quickly get back on my feet at which point I can back away or drive in for a take down. In pure grappling matches, a lot of people stall and rest by turtling. If you turtle in a real fight your opponent can end the fight by throwing knees to the back of your head. Interestingly enough, most grapplers I’ve encountered don’t know how to react to this. Yet another gift from Niko Han.

That’s all I know about defence for now. This doesn’t cover escapes, which is something I’m been working on as well.

I'm really enjoying Saulo Ribeiro's book, Jiu-Jitsu University. I've been testing his defensive postures in training and they are working well for my game. I also like his approach and priorities to building a solid grappling game: defence > escape > positions/passing > submissions. 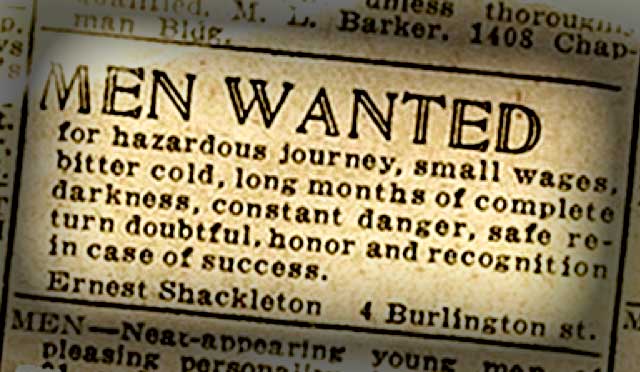 Advertisement placed by Ernest Shackleton in a London newspaper, August 1914.  It is said 5,000 people responded to it.

I saved this from a book about famous explorers I owned a few years ago. I can't recall the name of it though. Considering the era, I'm sure only criminals and low-lifes responded to the ad. Nonetheless, something about it calls to me :) For honour. For adventure.

What Should I Do With My Kid? 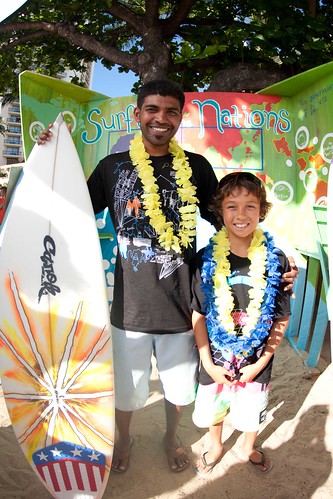 The people I've met in the last two years were really interesting. Instead of going the school-and-college route, they all refused to grow up and did whatever-the-heck they wanted. DJs, photographers, decorators, designers, artists, musicians, boat captains, jiu-jitsu fighters and coaches, surfers, boxers, bloggers, chefs, divers, writers, tattoo artists, and more. Everything in their life revolved around the things they love.

They made me wonder about how my life would've turned out if I had focussed more on my passions when I was younger, instead of following the school-college-conventional-work route. Maybe I should've continued cooking up a storm when I was a teenager and also found a way to race cars on a track. Maybe I should've kept playing the saxophone. In the last few years maybe I should have made videos about my travel adventures, and spent more time on photography. As they say, money follows passion, not the other way around.

I don't want to trade the life I've lived, but all this reflection made me think about how I'd like to raise my kids if I have them. I don't think I'll push them towards college like my parents did to me. I'd ask them to follow whatever it is they feel like doing at the moment. Whatever it is, resolve to be amazing at it and pursue it at all costs. Wanna be an artist painter? Sure go nuts! Wanna become a pro surfer? Sure, if you don't mind working at McDonalds in the meantime. Wanna be a fashion designer? Totally, I'll help you find help! Wanna be a race car driver? Rad, I wanna manage your team! Screw what my mom says right? :P

Isn't that what we all want in the end? For happiness, passion, needs, work, calling, desire -to all align. What would you say to your kid? For your current choice of work, how did you resolve to do something you love versus doing something you know how to do?